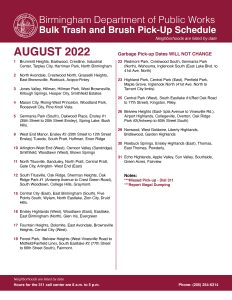 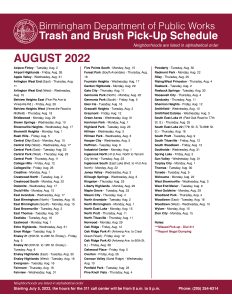 Our Department of Public Works has released the bulk trash schedule for August 2022. Please check the schedule and only put out bulk trash the day before your scheduled pick-up date. All bulk trash should be on the curb no later than 6 a.m. on the assigned collection day.

On another note, we continue to keep residents updated on which areas crews have completed.

Because crews are continuing to deal with staffing and equipment issues, they are unable to provide advance bulk trash pick-up dates for the rest of July. However, they have provided a list of the neighborhoods they have left to collect in July 2022. The neighborhoods are numbered based on when public works will address them and not numbered based on a date. They are also addressing areas, per day, based on the four quadrants of the city.

For example, for July 20, they are addressing the first 5 listed neighborhoods in the North Birmingham district.
Daily updates have resumed being posted to www.birminghamal.gov/bulktrash. DPW is working to have a schedule for August 2022. Please stay tuned for details on the August schedule.

One other note is that some reports may show repetition in that it may show that crews finished a neighborhood on a certain day and then the next day’s report shows that the same neighborhood was completed. That sometimes occurs because there may be pockets of a neighborhood that did not get finished and crews may have gone back to collect missed piles.

On July 12, bulk trash crews completed North Crestwood, Green Acres, Crestline, Eastwood, Fairview, Bush Hills, Dolomite, Apple Valley, Sun Valley and Echo Highlands. Some of these neighborhoods were missed in late June and early July, and crews did collections to make up for the missed dates.

On July 13, bulk trash crews will continue to address missed neighborhoods. They will visit Germania Park South, Industrial Center, Grasselli Heights and Roebuck. Due to the large amount bulk trash in Rising-West Princeton, they will also return to this area. As soon as crews cleaned up some areas in Rising-West Princeton, more illegal dumping happened over night there.

On July 11, bulk trash crews completed Overton, Southside and Bridlewood neighborhoods. Bulk trash crews also did work in Green Acres, North Crestwood and Echo Highlands, but did not finish. They will return to these areas on July 12.

On Sunday, July 10, crews started collections in Green Acres, Fairview, Crestwood North, Rising-West Princeton and Echo Highlands. They will return to these neighborhoods on Monday, July 11.

Also on Monday,  July 11, crews will start in Dolomite.

As a reminder, Birmingham residents should disregard the previously released bulk trash schedule for July because crews are continuing to do make-up days. Equipment issues continue to plague the collection crews, who remain committed in visiting as many areas as they can.

Residents are encouraged to check back to www.birminghamal.gov/bulktrash for daily updates on where crews will visit next.

On Thursday, July 7, bulk trash crews started in Belview Heights East and Green Acres, however, they did not finish because of the number of collections for the areas and staffing. They will return to these neighborhoods on Saturday.

Crews were slated to address other neighborhoods on July 5, but were unable to do so, due to ongoing staffing and equipment issues. Crews will return to the following missed neighborhoods this weekend:  Echo Highlands, Bridlewood, Brummitt Heights, Airport Highlands, Apple Valley, Sun Valley and Brownsville Heights.

On July 6, bulk trash crews will continue to work in Norwood. They will also start in Thomas, Ensley Highlands East, Fairview and Inglenook.

Because crews are running behind, residents should disregard the previously released July calendar that appeared on the website and await updates for when crews will begin in their area. Again, we apologize for the inconvenience but ask residents to be patient as we work to make collections.