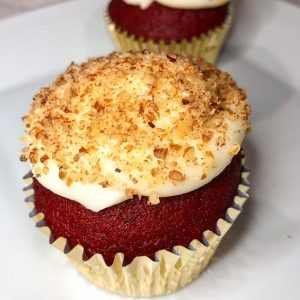 In 2017, LaToya Jolly was laid off from a downtown Birmingham insurance company after having worked there for 10 years.

She didn’t see it coming.

But what she did see was another way to make a living and that was through making and selling cakes. “I was laid off in September, and in December (2017), I took all the cake orders I could take,’’ she said. In January 2018, she decided to make cakes and cupcakes full time. She called her business, Jolly Cakes.

“It’s my last name, and the business has been booming ever since,’’ Jolly said. “I made this my own.’’

Jolly’s cupcake flavors include red velvet, strawberry, key lime and German Chocolate. She also offers a variety of cookies and flavored popcorn. Since the red velvet cupcake with cream cheese icing is her top seller and it reminds her of the city’s red clay, she has decided to rename it “Magic City Velvet’’ during the month of July in honor of the city’s 150th birthday. (Birmingham, which was officially chartered as a city by state legislature on Dec. 19, 1871, is celebrating its 150th birthday throughout 2021. More about the city’s 150th can be found at www.birminghamal.gov/150.)

“The red velvet is how I started baking. My company is built on it,’’ said Jolly, a graduate of Woodlawn High School who has a son at Ramsay High School. “I wanted to honor my hometown by tying in my top seller to the city’s 150th milestone.’’

Jolly, 48, said it’s ironic that the city’s 150th theme is “Built to Last’’ because she sees her company and herself as a survivor, just like the Magic City.

“I feel that I was built to last because after having two heart attacks, I still had the energy and the passion to bake cakes. I think that’s why I’m here,’’ said Jolly. “I think this is my gift from God. I’ve had no formal teaching in baking or anything. It just came to me. Naturally.’’

“I think I recovered (from those heart attacks) to spread my gift – my gift in joy and in treats.’’

Jolly, who runs the business with her sister, Tiwana Jolly, said that when she started her business, she didn’t know where she was headed. But because of support from family, friends, customers and those in the food truck industry, her path is clear.

“Birmingham customers support small businesses, and I appreciate that. I now have a food truck, and I’m seeing even more business for the food truck and for personal orders,’’ she said. “My strength is in my customer base.’’

Jolly Cakes will be one of several food trucks featured during the City of Birmingham’s Food Truck Friday, every Friday in July and August outside City Hall from 11 a.m. to 2 p.m.