Celebrate The City’s 150th With Us!

The year 2021 marks a major milestone for the City of Birmingham – our city is marking its 150th birthday.

The Elyton Land Company began selling lots in what would become Birmingham in June 1871. Birmingham started to take form that month with the merger of the Elyton lots and neighboring farmland. However, the state legislature did not charter the city until Dec. 19, 1871.

That date, Dec. 19, 1871, is officially recognized as Birmingham’s birthday.

Change has come to Birmingham over the years, and change continues to take place for the Magic City. The 2020 pandemic challenged us, but it did not break us. This city has experienced so much, but, still, it rises to meet another day. This city, our city, and its residents cannot be broken. Like the steel we were built on, we were built to last.

Birmingham is resilient, which is why “Built to Last’’ is the theme for Birmingham’s 150th. This special anniversary will be highlighted from June to December 2021.

To learn more about initiatives to help celebrate the birth of Birmingham, its history, its growth and more, please visit www.birminghamal.gov/150. Questions or comments? Send emails to builttolast@birminghamal.gov.

How do you see the Magic City? Share your views in the Birmingham View Photo Contest. This contest is open to amateurs and professionals. People of all ages may submit photos taken with a cell phone or a professional camera. The deadline to enter is Sept. 12, 2021. 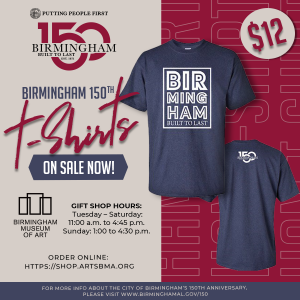 Special Initiatives for the 150th 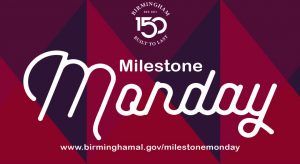 “Milestone Monday” highlights people, organizations, businesses, etc. in Birmingham celebrating significant milestones in 2021. It could be someone turning 50, someone celebrating 20 years of marriage, someone who’s been on the job for 40 years, a company that has been in business for 1 year, 10 years, 25 years, etc.

Nominees should submit their photo, what type milestone they are celebrating in 2021 and what the milestone means to them.

Nominees celebrating the milestone should live, work, attend school or volunteer in Birmingham. Businesses and organizations should be based in Birmingham. The person’s photo or photo of their business will be shown on social media and www.birminghamal.gov/milestonemonday throughout 2021.

Historic entries about Birmingham will be featured as “Did You Know” posts on social media and on www.birminghamal.gov/bhamhistory on Thursdays in 2021.

Aggressive Clean-up Programs For All 99 Neighborhoods 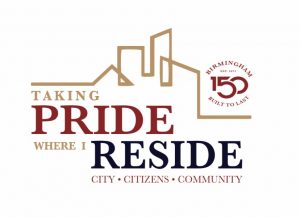 Mayor Randall L. Woodfin has launched an aggressive clean-up schedule to address overgrown lots and litter in Birmingham. The initiative, which is designed to be a group effort between the city, citizens and community partners, is known as the “99 for the 150th: Taking Pride Where I Reside.’’ It will start on June 21, 2021.

This effort will consist of a weekly blitz in the four quadrants of the city to focus on cleanliness, overgrown lots, trash and brush. It will also tie into the city’s 150th anniversary because neighborhoods have remained at the core of the city throughout its 150-year history and they will continue to be at the center. (The state legislature officially declared Birmingham a city on Dec. 19, 1871.)

Plan of Engagement for “99 for the 150th”: Taking Pride Where I Reside”

Check back with www.birminghamal.gov/takingpride for weekly updates and progress of this effort

People with interests in doing a neighborhood clean-up project or those who want to report illegal dumpsites, should send emails to customerservice@birminghamal.gov.

The vaccination rally will feature: